Sunday’s are my day to relax…I slept in, hung out with Kiddo and read. I am reading Lilac Girls and Midnight in Chernobyl and holy shit are they both good. They are both fairly long too, so it might be a few days to get through them. Not that I’m complaining though.

I listened to the audiobook version of this, narrated by Richard Powers.

I hadn’t heard of this book before, but when I read the summary I knew that I had to listen to it. See, I was in high school when the Seton Hall fire happened and I found myself at the viewing of one of the victims who had graduated the year before and was a member of the marching band (I was in the color guard). It wasn’t the first time I had someone my age group die, but it was the first viewing I had gone to. I had barely known him, but it didn’t matter. Twenty years later, I still vividly remember that day.

Listening to this book was hard. It was graphic, Robin Gaby Fisher went into meticulous detail about the fire and the aftermath of the medical treatment that these two young men endured. I am already paranoid about fire and burns and it was just so difficult to listen to this. The second part was a little easier, and it was inspiring to see the young men overcome their catastropic injuries with their friendship intact.

I listened to this book in a single listening session. It was five or six hours long, and initially I started listening while working on putting laundry away but then I didn’t want to turn it off because I suspected that if I did, I wouldn’t want to return to it and I felt it was important to finish this. I’m glad I did listen to this, I just wish that this had never happened.

Today was a better day at work…but then the car battery was dead so my husband was late picking me up. My car is in the shop, so of course the other car decides to act up as well. Happened last time my car needed to be fixed. Oh well, it’s Saturday and I have the next three days off.

I listened to the audio version of this, narrated by the late, great, Edward Herrman.

If Edward Herrman wasn’t the narrator of this book, I probably wouldn’t have read/listened to this book. I don’t follow sports, especially rowing (or crew as I think it’s called). It definitely would have gone over my radar but I enjoyed listening to Unbroken, which also would have flown over my radar.

I am glad that I gave this book a chance. It wasn’t the best book I have ever read, and honestly, there were a few times that I questioned my choice to listen to this. I held on though, and while this wasn’t my favorite book, it was the type of book that grew on me. I do enjoy stories where a person works their way up from nothing, and this was exactly that type of story. That it was a true story just makes it all the better.

“It takes energy to get angry. It eats you up inside. I can’t waste my energy like that and expect to get ahead. When they left, it took everything I had in me just to survive. Now I have to stay focused. I’ve just gotta take care of it myself’ Joe Rantz”

― Daniel James Brown, The Boys in the Boat: Nine Americans and Their Epic Quest for Gold at the 1936 Berlin Olympics

From Goodreads: In a life filled with meaning and accomplishment, Michelle Obama has emerged as one of the most iconic and compelling women of our era. As First Lady of the United States of America—the first African American to serve in that role—she helped create the most welcoming and inclusive White House in history, while also establishing herself as a powerful advocate for women and girls in the U.S. and around the world, dramatically changing the ways that families pursue healthier and more active lives, and standing with her husband as he led America through some of its most harrowing moments. Along the way, she showed us a few dance moves, crushed Carpool Karaoke, and raised two down-to-earth daughters under an unforgiving media glare.

In her memoir, a work of deep reflection and mesmerizing storytelling, Michelle Obama invites readers into her world, chronicling the experiences that have shaped her—from her childhood on the South Side of Chicago to her years as an executive balancing the demands of motherhood and work, to her time spent at the world’s most famous address. With unerring honesty and lively wit, she describes her triumphs and her disappointments, both public and private, telling her full story as she has lived it—in her own words and on her own terms. Warm, wise, and revelatory, Becoming is the deeply personal reckoning of a woman of soul and substance who has steadily defied expectations—and whose story inspires us to do the same.

In my lifetime, the United States has had six Presidents and of those six, Barak Obama was my favorite. Admittingly though, I never considered myself a fan of Michelle Obama. I’m not even sure why, but I suspect that I fell victim to the same bias many people fell under, thanks to the media. I just has the sense that Mrs. Obama didn’t want to be First Lady.

Because of my apprehension regarding the former First Lady, it took me a year to get around to reading (well, listening) to Becoming. I make no apologies for my contempt for the current administration, so in order to take a break from the chaos out of D.C., I decided that I needed to spend some time with the Obamas’. Even if Mrs. Obama wasn’t my first choice, it had to be better than anything coming out of the Trump camp.

As soon as I started listening to the audiobook (read by Mrs. Obama herself), I was hooked. As I listened to her life unfold, I found my preconceived opinions being swept aside. I found that instead of being that aloof woman I had originally perceived, this woman was inspiring and compassionate. As she shared her story I felt everything and more than anything I just wanted to apologize for not having the respect sooner. I wanted Mrs. Obama to be my friend, my mentor.

Of course, I know that that will never be possible, at least on a real basis. I can, however, use this story to hopefully guide my life.

“For me, becoming isn’t about arriving somewhere or achieving a certain aim. I see it instead as forward motion, a means of evolving, a way to reach continuously toward a better self. The journey doesn’t end.”
― Michelle Obama, Becoming 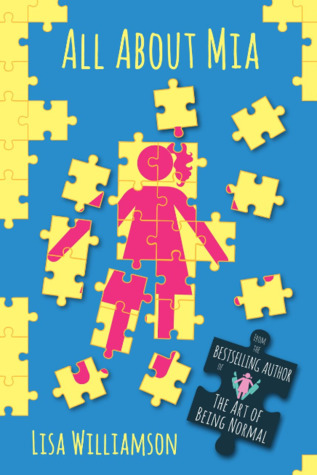 From Goodreads: One family, three sisters.
GRACE, the oldest: straight-A student.
AUDREY, the youngest: future Olympic swimming champion.
And MIA, the mess in the middle.

Mia is wild and daring, great with hair and selfies, and the undisputed leader of her friends – not attributes appreciated by her parents or teachers.

When Grace makes a shock announcement, Mia hopes that her now-not-so-perfect sister will get into the trouble she deserves.

But instead, it is Mia whose life spirals out of control – boozing, boys and bad behaviour – and she starts to realise that her attempts to make it All About Mia might put at risk the very things she loves the most.

I listened to the audiobook version of this.
If I had to describe my biggest emotional while listening to All About Mia, I would probably have to admit that I was mostly frustrated. Mia was not an easy character for me to identify with, and her actions throughout the book often made me want to grab her by the shoulders and shake some sense into her.
Once I got over my frustration, I then spent time diagnosing Mia. I was so sure at one point that the direction the novel would go in would be for Mia’s family to finally realize that their middle kid was not just a “handful” but actually dealing with some serious issues…but no, it turns out that there was a nice neat ending to this.
But the truth was…I actually enjoyed this novel. I liked having to deal with a character that did her own thing and was completely the opposite of how I was when I was 16. I think I’m also glad at the way things ended. It wasn’t how I would have ended things but sometimes it’s nice to have a nice ending to a story that in general, wasn’t nice.